Leaving Yellowstone, we had to do some driving. And driving and driving and driving. I had driven all around the park that day, so once we got out of the park, we stopped in Cody, WY to switch. There was a whole lotta nothing, then the Bighorn National Forest, which isn’t so much a forest as great big red rock formations with trees on them. We got just a couple of photos before the light left.

So, one of the jokes on this trip is that every time we stop somewhere, Jim has to pee, and smoke. He’s basically just peeing and smoking his way across the States. What a dude thing to do, right? 😉 Here he is, smoking in BigHorn National Forest. I promised I wouldn’t take *too* many photos. 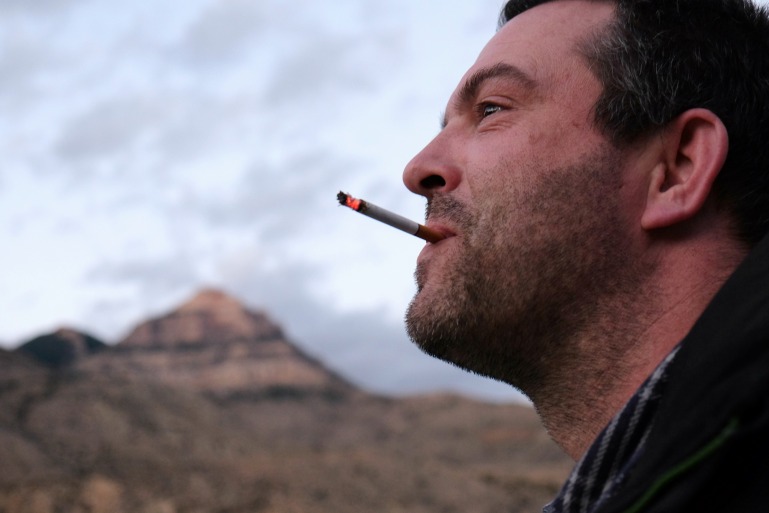 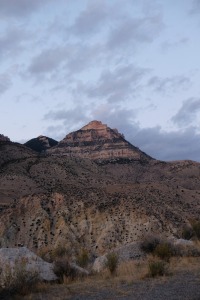 Then it got dark, and we just kept on driving, and driving, and driving. Through the Sheridan, WY area there were roadside signs indicating the age of the hillside in different places: Precambrian, Carboniferous, Triassic… lots of fossils in there. We spent a lot of time wondering what these areas would look like with dinosaurs roaming around. One sci-fi thing I’ve always dreamed about is to somehow go back in time and install cameras in fixed places in the sky, and record billions of years worth of video. Then go back through and watch each place change over time (in time-lapse, of course). See the dinosaurs come and go, watch the Missoula Floods score across the West…

Anyway. We can’t do that, so. We drove most of the way across Wyoming, and had chosen a rest area that we figured we’d hit at about the time we’d be pooped. But we got there, and not only were there signs everywhere saying “no overnight parking,” but apparently a cop did rounds there every hour or so (we saw him coming around). So we figured we’d probably be woken up in the middle of the night if our car remained there. So Jim — what a darling! — drove two more hours (with me in the back, sleeping) to a KOA in Spearfish, South Dakota.

Which meant that this morning, I TOOK A SHOWER! And it was hot, and now I no longer have a week’s worth of grime on me. Then we stopped in Sturgis for coffee. This sign was on the door – it might as well have said, “Toto, we’re not in the Northwest anymore.” Wow. Judicious… what an interesting choice of words. But the lattes were good – the guy who made them said to us,

“You’re gonna be pissed when these are gone!” 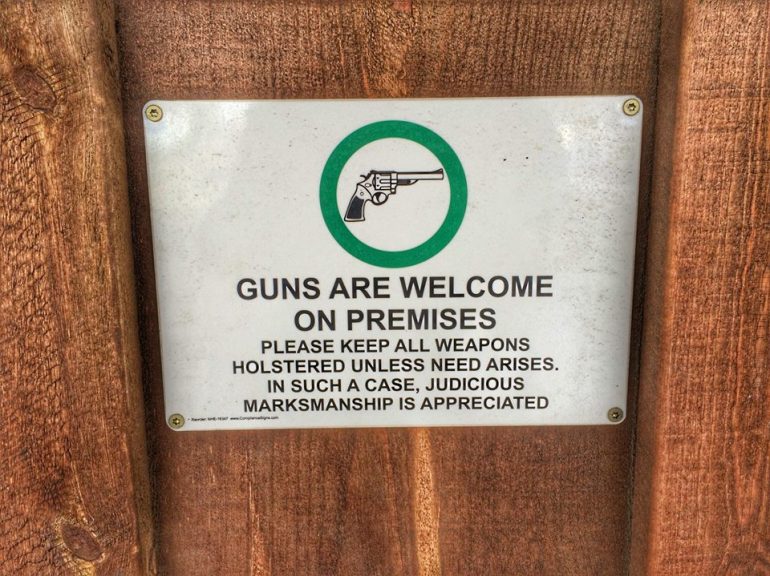 After Sturgis, we took a side trip (at my request) to Mt. Rushmore. WOW is the drive to the monument fraught with tourism! As soon as we left Rapid City, we must’ve passed two dozen billboards for Christmas Villages and glow-in-the-dark mini golf and glass-blowing and Indian Museums and Reptile Gardens and dinosaur parks and bear zoos and horse sanctuaries and jeep rides and presidential wax museums and whatever-the-fuck a Cosmos Mystery Center is…. holy jeepers. I guess they reaaallly don’t want you to get bored in Rapid City, SD. Even the little town by Mt. Rushmore is a kind of creepy little fake mining town with Las Vegas-style lights and hotels and a zillion ice cream and postcard stores.

Thankfully, most of it was closed, and there really weren’t very many people there. We got to see the monument – for a mere $11 to park – without much trouble.

Then it was just… more driving. 80 miles an hour on I-90, roughly 800 miles, 12.5 hours. The best story I can tell you is about me, white-knuckling it through my turn, in the dark, on a fairly rutted section of road, in the pouring rain. I couldn’t go over 65 without hydroplaning (ohh geez, as they say out here) so everyone was passing me, and every time a semi-truck came around, I’d get blasted with a wave of water and rocks across the windshield. Worst two hours ever. But we’ve made it to Madison, to Jim’s parents’ place. We’ll lay low for a few days, hang out with his family, do Halloween on State Street (I’ve never been!) maybe go to Door County even though the fall foliage is mostly over with.