Day by day I am becoming acquainted with more of Seattle’s outdoor space! This time it was Gas Works Park and Magnuson Park. I love Gas Works Park because you can see so much of the city without being IN the city. We saw two byplanes fly in and take off from Lake Union while we were watching the clouds; several sets of rowing crews came slicing by; the houses on the east side of the lake lit up as the clouds shifted; and the Space Needle watched us from the other side of the lake, austere and unchanging. 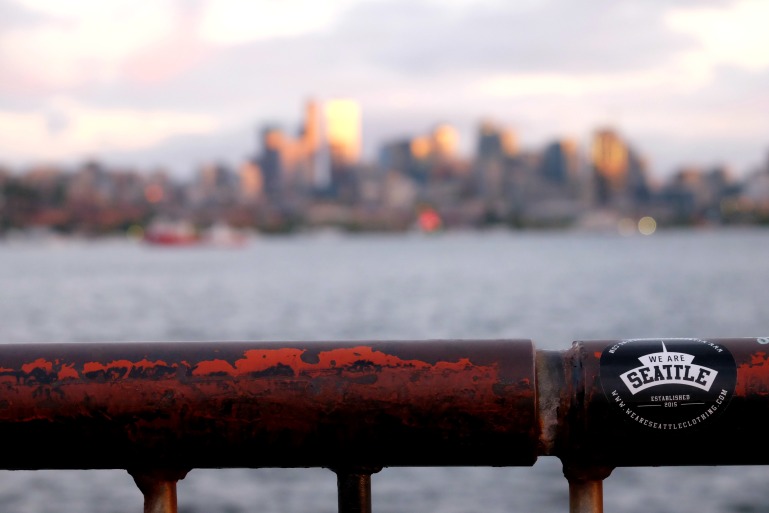 Gas Works Park is what remains of the Seattle Gas Light Company gasification plant. The abandoned towers, a bit rusty and home to ambitious ivy plants, stand in the middle of the park, announcing their presence: we are here, and we used to do things. The rest of the plant – the pumphouse and the boiler house – were converted to more modern uses. What Seattle now calls the “Play Barn” is a series of old pipes and storage tanks and gears, painted brilliant colors. It doesn’t seem much like a play barn to me, though. The accessible and colourful old pipes look like a playground to me, but there are signs everywhere indicating that any climbing on the structures is prohibited. The rest of the area is solid concrete, reeks of urine, is littered with trash and homeless paraphernalia. A good idea in theory, not so much in practice.

On the other side of the towers is “The Great Mound,” which was constructed from old building rubble and soil. At the time of our visit, it was off-limits to humans, surrounded by a large chain-link fence. It was an outdoor picnic that only geese were invited to. Apparently there is a large art structure at the top of the Great Mound, a sundial, not visible from where we could access today.

After we left Gas Works, we drove over to Magnuson Park – just in time for sunset clouds! Also, we met some very friendly (and beautiful) ducks. We’ll be back again soon for a more in-depth tour of this park.