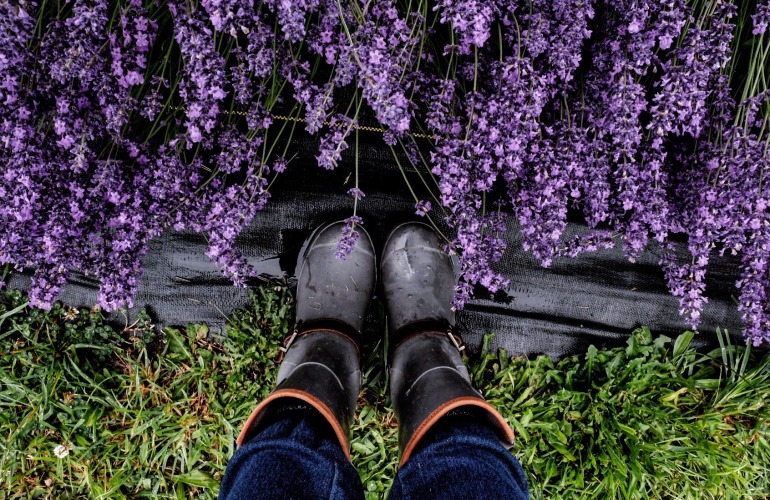 There’s a little corner of the United States, the upper left one, that is a conundrum of precipitation. This corner (the Olympic Peninsula) is the part of Washington that looks like it’s being torn away from the mainland. Mount Olympus sits astride this peninsula like the queen that she is, watching the Pacific Ocean to the west, the Salish Sea to the north, and the Sound to the East. She is one of the rainiest places in the entire US, getting about 220 inches of precipitation per year. A few miles west, the town of Forks, WA (of Twilight fame) gets about a hundred inches fewer. Seattle, for comparison, gets an average of 38 inches of rain per year.

Tucked in the midst of all this drizzle, sits the town of Sequim. Pronounced more like a tentacled sea creature than a shiny adornment, Sequim gets a meager 16 inches of rain per year (Los Angeles gets about 15!) The reason for this is a rain shadow.

A rain shadow occurs when a mountain(s) blocks moisture from its leeward side. This is kind of what happens between the western and eastern sides of the Cascade mountain range, making one side a lush, mossy paradise full of magic and wonder, and the other side a hot, dry, dusty wasteland that’s baked or frozen brown three-quarters of the year (but I digress).

It turns out that lavender just so happens to like this drier, sunnier climate, making Sequim the perfect place for it to grow. And grow, it does! Endless rows of it.

We had the opportunity to meet Bonnie, one of the ‘B’s’ of B & B Family Lavender farm, who told us that the lavender trade in Sequim had only started in the 1990’s.

“People realized that this area was about the same latitude and climate as Provence, France,” she said. “So they said ‘well, let’s try lavender!'” She and her husband, Bruce (the other ‘B,’) bought an existing farm, which had previously been a dairy farm, then a llama farm, before the owners decided to go with lavender. 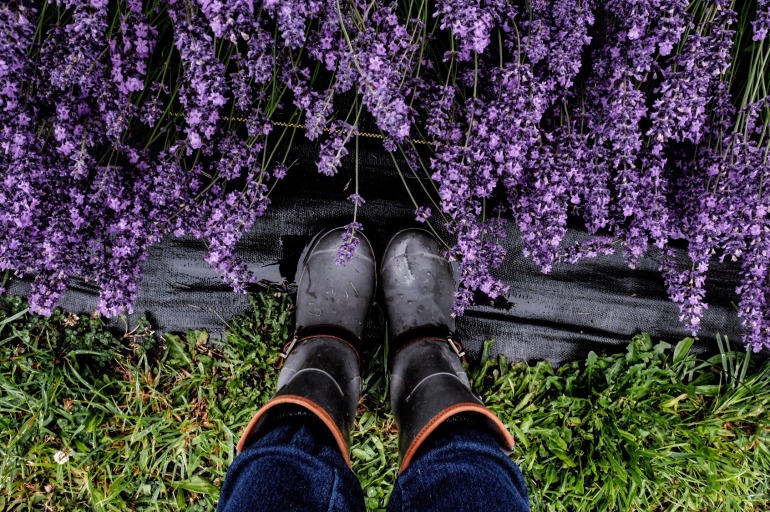 And I’m so glad they did. It was a treat to drive just a few short hours and arrive in a mini Provence, and our timing couldn’t have been better! The lavender festival is in late July, when the flowers have all bloomed. The day we visited was rainy, and we mostly had the place to ourselves, including most of our “tour” of B & B Family Farm with Bonnie.

“You just happened to come on one of our very rare rainy days in June,” Bonnie said. “We only get 16 inches all year – and hardly ever in June!”

But I loved it. The rain clung to the lavender buds, giving the appearance of endless rows of shimmering purple stars. The unexpected moisture gave rise to the pungent, sweet & sour smell that only wet on dry can bring.

My favorite farm was called Martha Lane. It was hidden away down a long dirt drive, nestled among stands of trees. There’s a lovely mint green farmhouse that looks as though it could have been 100 years old, though the owner built it in 2010.

Martha Lane has a little purple and white gazebo in the middle of the two lavender fields. A tall pine tree towers over the far end of the farm, and if you stand under it, you get a whiff of pine, lavender, and rain that is definitively: summer.

I walked down the rows, gathering dew myself, as my legs brushed past the hanging heads of lavender. The guy who owns this farm, Mike, told us it was for sale – oh, how I wished we could buy it! I would love to live in a mint green house and tend to fields of royal hues.

I had already learned a lot that day. There are a couple hundred different varieties of lavender plants – culinary varieties, oily ones for distilling, pretty ones for decoration, plants that prefer drier climes, some that prefer rain…

Mike had showed us his still, where he condenses the fragrant blossoms into essential oils. Sitting on the porch of an old shed, the contraption looks straight out of 20’s era Prohibition. So much so that Mike said he’s been visited on occasion by law enforcement to make sure he’s not making whiskey, rather than oil. He carved a bench in honor of them. Some of his oils, including his “Royal Velvet” variety, have won international awards. 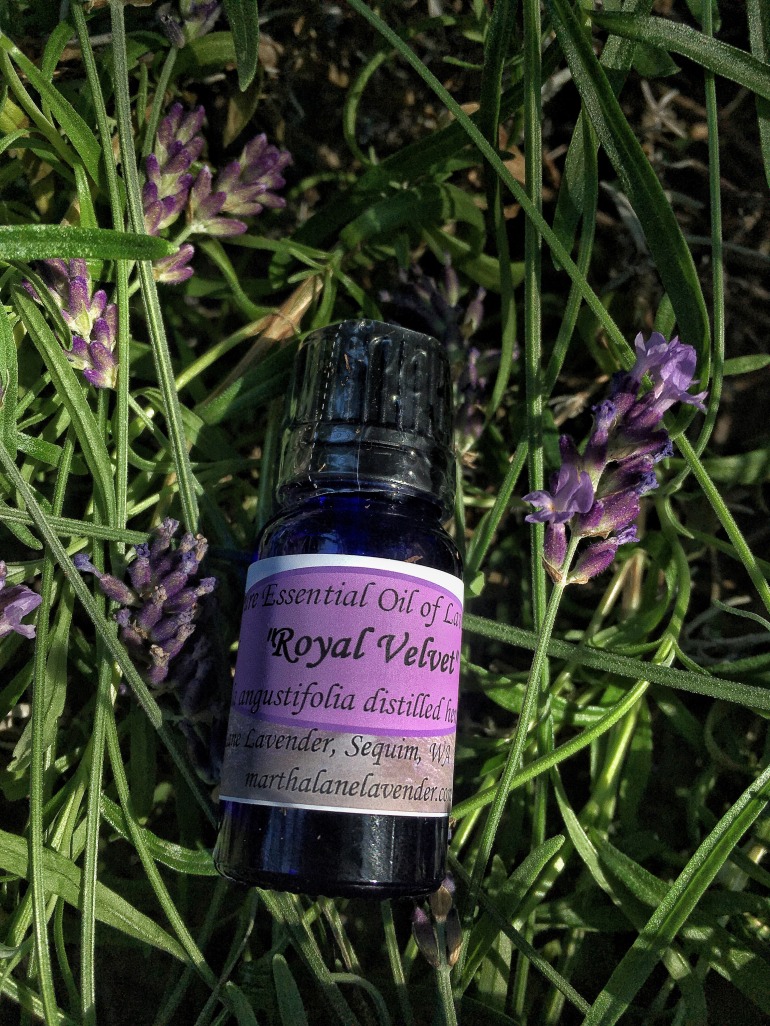 He said he could fit about 75 pounds of lavender (which includes the stems and leaves, in addition to the buds) into the kettle, which is impressive, given how small it looked.

Bonnie at B & B also showed us their still. I know they’re made of copper because of how it reacts, but I like to think they’re just prettier that way, too. B & B was in the process of moving to a much bigger still, but their current still was comparable to the one at Martha Lane.

Bonnie said each distillation used about 6-12 full lavender plants, and made anywhere from 3-10 ounces of essential oil, depending on which variety of lavender they used. 3-10 ounces! No wonder the stuff is so expensive! But that’s most of the business, besides wholesale dried lavender: essential oils, which then get added to lotions and soaps and shampoos and bath salts, etc.

Mike (of Martha Lane Lavender Farm) said that during the lavender festival weekends, he and his wife often have to stay up all night, making more soap because they completely sold out! 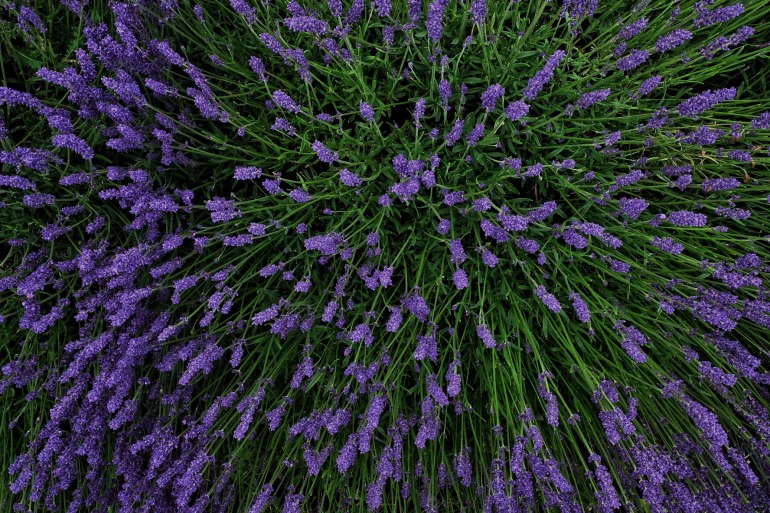 Before we left we got some award-winning oil, soaps, some fresh lavender, blackberry lavender wine, lavender lemon coffee cake, and a whole bunch of pictures!

This weekend is the lavender festival out in Sequim – I highly recommend going out for a visit!

If you pick up some culinary lavender, give these recipe a try!