In reading my journal and looking back on our trip, one theme jumps out at me: how colorful the Lofoten Islands were. One of the main attractions for us were the beaches: gleaming white crescents sandwiched between turquoise water and verdant stony mountains jutting into the sky. They were beaches fit to grace tropical islands, though the water was chilly, and the wind chillier. They were so quiet — the bays filled up at high tide, and snuck out at low, with nary a wave to announce it. I had a good observation deck from my perch on some boulders while we took photos of the purple sky on our first proper night in Lofoten. The light was different on every surface that night: easter egg in the sky, rose gold on the rocks, aquamarine in the water, until it got too dark to tell.

The beaches yielded unexpected treasures: perfect moon snail shells collected in lines along the rocks in hues of rust and mustard, seaweed and sand. Little curly piles of lugworm castings created an alien topography on the shore (and were fun to squish!) 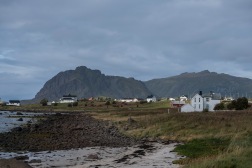 We went whizzing past dozens of yellow houses and through pitch-black tunnels in our violently blue camper van. In my mind’s eye I could see us: a painful streak of azure cutting across mossy valleys and stony mountains dotted with creamy sheep, under a gloomy sky.

We stopped to admire an ochre harvest moon rise over Henningsvær. As with most of our stops, this viewing required a double turnaround. We had to wait for our light at the one lane bridge going west, then going back east before we could pile out of the car and turn our lenses to the sky. It was my duty to keep an eye to the scenery and yell out (not too frantically) to stop when there was something good. I did this about every 100 yards or so. We fangirl’d over the iconic red Rorbuer at Hamnøy. They were perched cheerily at land’s end, black rocks and steely waves roiling below. Across the road, empty fish racks waited for winter. In December the Rorbuer would be filled with fishermen, who would soon load up the giant wooden racks with salty fish carcasses. I had the misfortune of finding a few leftover heads on the roadside, but it did give me an idea as to just how big the fish were!

We marveled at the raucous laughter of seagulls gathered in pairs on a cliff, and wondered at the sanity of the people living in the yellow house directly above.

We tried to hike, we really did. But unfortunately we chose to hike in the Emyn Muil – an impossible labyrinth of razor sharp rocks and festering, stinking marshland, as far as the eye could see. Well, a bit less dramatic, but we did get bogged out. Oh well.

We drove all the way out to the end of the archipelago, to the town of Å (pronounce at your own peril). Luckily, the Norwegians share my love of tiny things, and in this town of Å there was a display of tiny boats. Many places also had tiny replicas of their own house in the yard, which was a wonderful tradition I think Americans should adopt (along with universal healthcare and free education, of course). 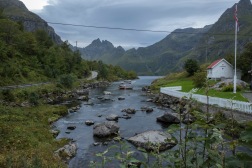 We trudged up the side of a mountain to get a better view of the sweeping bridges at Fredvang, punching down through fluffy layers of duff and moss — at one point I was up to my knees, trying to stay still enough to take a photo. We camped at beaches – popped the top after dark and woke up to stormy waves at Unstad Arctic Surf beach, and watched the tiny figures in their dark drysuits, practicing for next month’s competition. We set up in Ramberg, grateful for the communal kitchen in which to make late night couscous. We watched the ethereal emerald waves of the Northern Lights stretch above us in the most unlikely place: a sterile KOA type campground in Tromso on our last night.

So many colors, so many photos, so many memories. Until our next trip!