Question: Why do people love backpacking so much? And why haven’t I done it yet? Having grown up in the Pacific Northwest, it’s more than a little silly that I haven’t gone backpacking before. I’ve tent-camped a hundred places, hiked a hundred more, but never the two together.

My encounters with backpacking have been purely anecdotal. My friend Danielle goes backpacking all the time, and even met her boyfriend on the trail. Half of the people I follow on Instagram go backpacking, or at least take photos of themselves with backpacks, outdoors. I read Wild. You know.

It seemed like such a hassle. You have to get a special backpacking backpack, and a tiny cooking set, a special lightweight tent and sleep pad, and a compression sack for your sleeping bag, among other things. After the fourth visit I figured that REI pretty much invented backpacking to keep themselves in business. I am definitely looking forward to that dividend next year.

Once we’d stuffed everything into our bags, we weighed in — me at roughly 30 lbs, my boyfriend, Jim, at almost 70. We both had our cameras and telephoto lenses, plus he had other lenses, and a tripod. I think he was taking Wild a little bit too much to heart. I told him he had to choose a different name for his pack – Monster was already taken.

Then there were the logistics of getting there. Jim decided he wanted to hike at Shi Shi Beach, his reasoning being that it’s one of the most photographed places on the WA coastline. That seems like the opposite of a good reason to me, but I agreed anyway. So we sailed across the Puget Sound on the ferry, and stayed at a trusty Super 8 in Port Angeles.

On the way, we discovered that we had to get a bear canister for our food (bears? at the beach?), an Olympic National Park hiking permit, and a Makah Tribe Recreation Pass. At the Wilderness Information Center, we learned how to pronounce Shi Shi Beach (she? shih? shy? you guess!*), found out that our bear canister was actually just for raccoons (disappointing), and got our permit and tidal charts. Then we were on our way to Neah Bay, where we’d get our recreation pass.

Neah Bay is always a depressing little town, to me. I feel like it’s caught in between its two cultures: there are majestic carved poles, and signs in native languages, right next to scrappy trailer parks with faded American flags in the windows. People probably wouldn’t pay it any attention if they didn’t have to get recreational passes to visit the beaches.

Now we were done with logistics, it was time. With nothing left to do but to put our packs on and walk, we headed into the forest. How far was four miles, anyway? 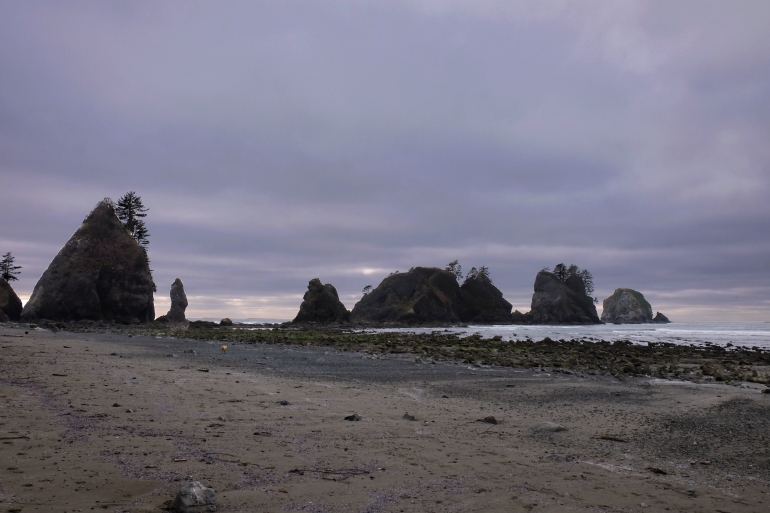 Far enough. My favorite part was watching everyone trying to pick their way through the vast swaths of trail mud without getting muddy. You could tell some people had been resourceful — a flat-ish log bridge here, a mat of sawdust there. Some people tip toed around the very edge of the mire, some went well off the beaten path to avoid it completely. And others (like Jim) had clearly just marched right through the middle of it. “F*ck it,” I think was the term used to explain this type of decision.

But easily the most difficult obstacle for us was the steep path leading down to Shi Shi beach – we had to almost rappel ourselves down, using the handy ropes tied to the trail. We met several lovely people at that very spot who commended us on our choice to backpack in. In that moment, I didn’t appreciate it.

We had finally arrived! After a short break, in which I found at least six hermit crabs in beautiful shells, we continued on. We still had almost two miles to go along the beach to get to where we wanted to camp, but somehow having the ocean on your right makes it easier to trudge with a 30-lb bag on your back. Picking up shells with said backpack, however, was very awkward – I think I have plenty of practice now for when I am old, or pregnant. We did not regret bringing our heavy telephoto lenses, though, as we got some whale-watching in. We counted at least seven whales in the area.

Our camp spot was perfect – the far end of Shi Shi, just before the Point of Arches. We were alone with the sea. We pitched our tent just under the tree cover and explored the tide pools and took pictures of the rock formations at Point of Arches; like so many rows of typewriter keys among the reflections of the sky. After nightfall we burned damp logs until they ran out.

In the end, I learned that probably what had kept me away from backpacking all these years (hard work, planning, and determination) was exactly why people love it so much, and why I am going to do it again and again. If that is what it takes to get me at the end of a beach with a glorious tide pool at my front door, I’m in.