So this weekend, Jim and I stayed at a cabin in the YMCA of the Rockies, of all places. Jim’s old business partner and his family live in Denver, and arranged the whole thing. It was a bit of an odd experience, but fun! I’d never have thought to stay someplace like that, but the kids had fun doing crafts and roller skating and renting games to play.

We grownups had fun making fires in the fireplace, drinking whiskey and coffee, and going on a couple hikes. We did a very tiny hike with the kids around Bear Lake – man was it crowded! Jim and I waited about 20 minutes just for a parking spot to open up. It was more of a stroll, really, about .7 miles around this little lake. After puddle-jumping around the lake, the kids’ feet were wet and cold, so they went back to the cabin, and Jim and I continued up from Bear Lake past Nymph Lake, Dream Lake, and Emerald Lake. That was more of a climb – 3 miles and about 1000 feet in elevation (already at 7,000 or so) through plenty of packed snow. There were still a lot of people there. At the top of our climb I got about two minutes to myself while Jim went to take photos somewhere up further, and it seemed quiet… at first. But then I could hear jets up above, cars in the distance, and people talking and laughing, faintly, at the other lakes. Not quite serenity. But still very pretty.

We got someone to take our photo at Dream Lake. It seemed to be the code that someone took your photo, then you took the next person’s, then they took the next person’s… and this all took place just past the “please stay off the restoration area” sign. Go figure. We saw plenty of birds up here – the grey jays in particular were not very shy at all. Some people were eating a snack, and the jays were hovering just above them, waiting for a crumb. 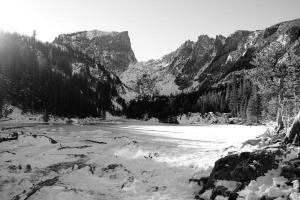 The way back down was quite a rush! I didn’t slip much, since I kept one foot planted in the snow bank on the side the whole way down, but Jim did some ice surfing, and plenty of other people were swept off their feet. I guess the temperature dropped enough in the late afternoon to turn the slushy downhills into icy slip n’ slides.

So today we left. The road Jim was planning on taking out of the park to the Grand Tetons was – surprise, surprise – closed! So we had to take a long way around. The interstate wasn’t going to be any faster, so we took the scenic route, back east to Fort Collins, then west again, on 14 out past Steamboat Springs and on up to Wyoming, again. I never thought I would be in Wyoming so much!

Our roadtrip playlist is evolving – here’s some of what we listened to across Nebraska, Colorado, and Wyoming:

We had lunch at a scenic overlook at the end of the Rockies. It took the grey jays all of about 2 minutes to figure out where we were. Oh, yeah, and Jim continued his smoking across America. 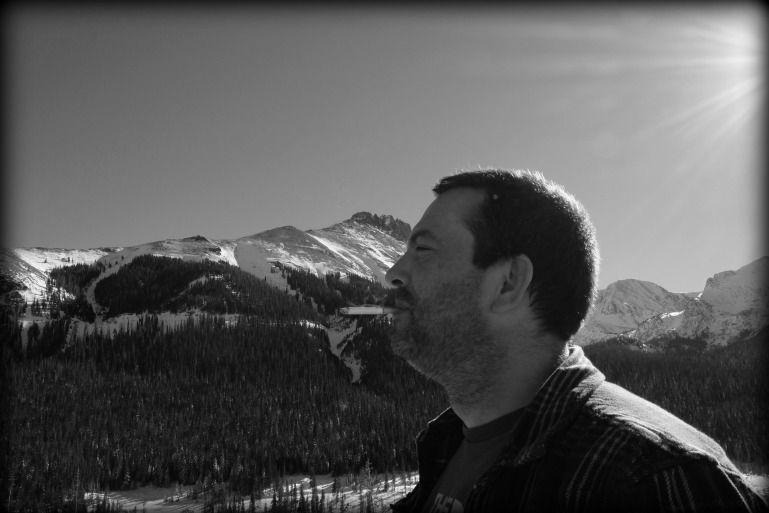 So now we are in the Grand Tetons. More later.

Stay healthy out there!
Tis a good year for snowdrops. 💦 These flowers (and many others) just amaze me. Their “design” is so cool! The little notched centers, rimmed with white, the lantern-like petals that open with warmth. I remember collecting one to use for a photo of Neil Gaiman’s book, ‘Stardust’ (which contains a major reference to snowdrops) and in the few minutes it spent in my house before I took the photo, it had gone from looking like a little white bean on a stalk, to something more like this!
I would be honored if you would kindly “lichen” or follow my Facebook page! It’s where I will be posting updates on my book writing, more photos, and sharing relevant articles and such. I’d love to connect over nature and writing and the NW. (Link in profile, or just fb.me/annaasnook)
This is an all-around pleasing book. Just the right size to carry with you, smooth feel and lovely color, and of course the poems are magic. David Guterson has crafted a thoughtful repast on hiking, hope, and finding solace outdoors. 👍🏾 Highly recommend, and hopefully he’ll do another Seattle reading soon - I missed the one in December!
Without planning to, it seems Jim and I have established a yearly habit of visiting Deception Pass State Park on the third weekend in January. 🤔 It really is lovely this time of year, though... . . #deceptionpass #january2020 #pnwmood #moodygrams #mood #ferns #pnwonderland #pnwexplored #northwestcoast #northwestisbest
It’s time for a reintroduction! My name is Anna. 👋🏽 I am socially awkward (hence this choice for introduction photo) and prefer writing and reading and taking pictures of mushrooms and slugs and mossy logs. Which is why I love IG - so many kindred spirits aboard this ship. 🍄 In case you’re interested, I use a Fujifilm XT-2 (mirrorless), and my favorite lens is the 18-55, and the MCEX-11 macro extension tube. Anyway, thanks a bunch for looking at my photos and reading my words. I look forward to seeing what everyone has in store this year. Please drop by and say hello! ⬇️ . #newyear #nature #photographer #behindthescenes #seattle #thatpnwlife #herpnwlife #wanderwashington #pnwdiscovered #pnwphotographer #oregonian #seattletransplant #macro #natureshots #writersofinstagram #amwriting #naturewriting
An ode to dark places... . . #pnwdiscovered #thatpnwlife #coasttoforest #pnwescapes #wanderwashington #trailshot #northwestisbest #northwestexplored #herpnwlife
𝙼𝚘𝚜𝚝 𝚘𝚏 𝚖𝚢 𝚏𝚊𝚟𝚘𝚛𝚒𝚝𝚎 𝚙𝚎𝚘𝚙𝚕𝚎 𝚊𝚛𝚎 𝚋𝚘𝚘𝚔𝚜 📚 #robertmichaelpyle #naturewriting #naturewriter #shelfie #newyearseattle #seattle #happynewyear #roaring20s
Here’s to new beginnings! New year, new decade, new fronds! 😂 What are your goals this year? I am going to finish my freaking book, and try to fall back in like with Seattle, even through it drives me nuts. . . . #newyearseve #newyears2020 #farewell2010s #roaring20s