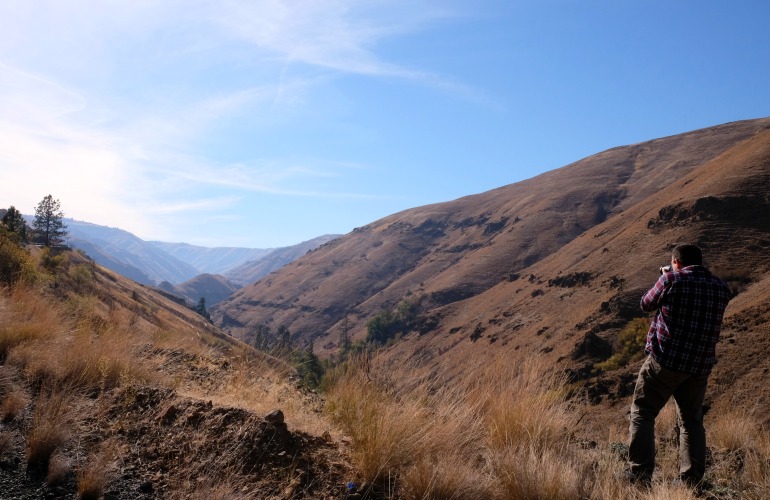 So, hello La Grande, goodbye La Grande. It was a super short visit – Jim dropped me off and headed back to Pendleton to play and record some music with friends, and I hung out with my mom a little. She had to work both nights & sleep somewhere in between, so I had a lot of down time. I searched out some postcards at different little stores downtown. They were… interesting. In case you’ve never been to La Grande, let me impress upon you the immutable right-wingness of it all with one photo:

And yet, somehow, a Fairy Beads store has managed to exist here for years…

Then I drove seven hours. We went NE, up through Enterprise, OR and on to Lewiston, ID, which was not nearly as bad as I remember. I had gone there once for a fiddle contest in my youth, and it was the dingiest, smelliest, dirtiest place I’d ever been. Not so bad today. There were some lovely bridges over the Snake River, and the paper mill smell did not quite permeate everything.

Next, we traveled through the SE corner of WA. Three states in two hours! We saw some wildlife: plenty of magpies, some blue jays, a hawk of some kind, lots of little chipmunks and squirrels scurrying across the road, and some deer (that thankfully didn’t run across the road). We even heard an eagle when we stopped to take photos of this canyon. 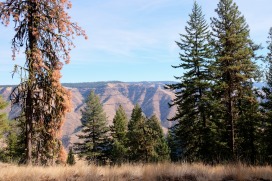 Though very curvy, and precarious, the canyons/ravines were pretty cool. We also passed interesting places like the Nez Perce “Heart of the Monster” site, which sounds pretty creepy. Apparently it’s a part of Nez Perce “origin” stories – a monster ate all the people, so a coyote tricked the monster into eating him, but secretly he had a stash of flint knives, which he used to cut up the monster from the inside out, and setting all the people free. Then the coyote washed the blood off his hands, and the drops of blood became the Nez Perce people. Anyway.

Here are some snippets of the Clearwater River: 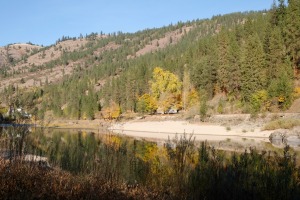 Then from Lewiston over Lolo Pass to Missoula. After we took some photos of the Lochsa River, Jim gave me a break, and drove the last two hours to Missoula. We couldn’t find the campground he had looked up (we suspected it might have been closed at this point), so we ended up going to a KOA outside of town to crash for the night. We have a pretty nifty setup – with lights! So I can continue to read Stephen King novels right before I go to sleep in the middle of the woods.

Now we’re on our way to Glacier National Park – more postcards there. 🙂